The Van Gogh of rock ‘n roll (Twisted Vanity):
https://groundsweeprecords.bandcamp.com/track/the-van-gogh-of-rock-n-roll-twisted-vanity
Song meaning:
In this digital age as a singer/songwriter or creative of any kind its extremely easy to lose touch of what is important and get caught up in the narcissistic and frivolous, vacuous pit that is the internet. It’s hard when your creative efforts get compared with how many people clicked on a link or how viral you’re latest single or video went on Soundcloud or Youtube. I’ve literally had other musicians say to me “you know Matt you don’t get booked for the big gigs because you don’t market yourself enough, you don’t have a big enough presence online, you’re a good songwriter but just work on your marketing a bit more”. These kinds of sentiments drive me to near insanity where I constantly tell myself "I am an artist, not an Instagram model". Then in my descent into creative madness, I have two choices give up or go into a frenzied crazed, creative binge, where I write and write and write, regardless of whether anyone will actually listen or ever hear the songs I have just written. I take huge inspiration from Vincent Van Gogh during these times, he is by far my favourite artist and I think his story is strangely compelling for anyone who feels lost in a digital sea. Even though he never sold a painting in his own life, he went on to be considered a pioneer and innovative voice in the art world. Yes, his story is tragic but the world only saw his brilliance in death. So the narcissist in me says, “Maybe I’ll be the Van Gogh of rock ‘n roll, maybe these songs aren’t absolute crap and maybe people will actually listen to them once I’m dead”. Then I realise that this is just the ego playing tricks on me, because archiving our existence really does mean very little in this day and age, where if things carry on the way they are, we will all be swallowed by the ocean in the next coming years, so honestly, “why should I even care at all” because everything we created will be lost at the bottom of the ocean anyway. Maybe it’s quite a nihilistic message, but at least I know I will carry on writing songs come hell or high water, even in the face of coming ecological suffering and the apocalypse.
Lyrics:
A subtle word
A subtle verse
I am quiet and alone
My voice doesn’t resonate, as loudly as yours
Because I never studied, the algorithms
I never grasped or wanted to understand the ways of the internet
My narcissism makes me hope
Hope that one day I will be the Van Gogh of rock ‘n roll
My songs and words will only be heard long after I am gone
A hopeless forgotten song
Of longing and sweet vanity
I’m blue and eating paint
Did I get the message wrong?
Am I way too late?
My medium is destroying me
But I will endure, I will endure
Death the only cure for this sadness
We are nothing
In relation to the universe, the stars, the sun, the moon
So why do we create or even care at all?
Even care at all, even call at all…
Archive, archive, I hope to stay alive long after I am dead.
But I know that it’s just vanity, vanity, some kind of twisted insanity, insanity
The sea will swallow everything we built
The sea will swallow everything we built
Including the stories we told
Including the stories we told
The poems, recordings, paintings, and drawings
The poems, recordings, paintings, and drawings
Will be forgotten with the death of humanity
Will be forgotten with the death of humanity
It’s all just vanity
So why do I care at all?
The sea will swallow
The oceans will swallow
And wash away the remnants
Everything we built
Will be swallowed by the ocean, the sea, washing down the river, see
Everything we built will be swallowed by the sea
Washing down the rivers, swallowed by the ocean

It’s an empowering place to be in when you’ve hit what many would deem to be rock bottom (in a commercial sense that is) and still carry on making art entirely for art’s sake. I put so much love and care into the Durban music industry (if you could even call it that). For its only reciprocation being to turn its back on me, during one of the darkest and loneliest times of my life. Merely because I couldn’t service its needs anymore. My health and hearing took a massive knock and after a certain venue owner accused me of stealing (something I have never shared on a public platform) after all I was trying to do was help him and his venue. I felt that I had extended myself further than I ever should have.

I decided enough was enough and went into hiding, no one really saw me around anymore and no one really ever bothered to call because I wasn’t running events anymore. So there was little that these so-called “friends” or colleagues could get out of me. From being around many people who supposedly cared, I now found myself in an environment where I had very few people around me. Nothing more than a small and tight group of friends. People who called me to see if I was okay, people who saw what had happened and actually gave a fuck and didn’t want a booking or a stage to play on, people who didn’t have stars in their eyes and didn’t care about fame or attention or “the scene” or a gig or their performance fee or guarantee or door deal or what they could get out of me.

After this heartbrokenness and the hopelessness I found myself in, after putting years into a venue and a project only to see other people abuse my hard work and dedication. Ultimately riding off my broken back. This put me into a headspace where it was extremely difficult not to become bitter. It was extremely hard not to become jaded. I succumbed to anger and depression and in turn, became utterly lost. A world which I had invested so much of my love and care into just didn’t show any care back and ultimately I felt like a commodity to my peers and the art community, a commodity that had reached its sell-by date, a commodity that was broken and old and not needed anymore.

I lived close to all of these emotions, I breathed them in deep like fresh oxygen and I let the anger and bitterness well up inside me. However, I also did well to conceal this anger and sadness to the outside world often at the expense of my own mental well-being.  As the few people left in my life put up with my relentless sorrow and wretched wallowing. I needed healing and healing takes time.
Through all of it, my love for music remained true, and I found a place where the act of creation became the most infinitely important thing in my life.

I stopped giving a crap about helping a crumbling and underserving music scene and started focusing on my own writing. I found my voice again, I found solace in my own company, contentment, and commitment to producing art that I was hugely and immensely proud of. I did it all for myself and the fact that I couldn’t tour as much as I used to enabled me to value the act of creation for what it really is and has been all along: LOVE.

Love is why I still write poetry and music, love is why I get out of bed and love is why I still have a deep and relentless desire to make music. Even if I never get the opportunity to tour again, even if I don’t make any money off any of the music I create further, I will still create it, I will create it for myself and a tiny group of individuals who are willing to look up from their smartphones for a second and engage in something that wasn’t fed down their throats through marketing managers and hopeful wannabees, who have a propensity to manipulate the algorithms of the internet.

I will still make music year in and year out, and for the first time in my life I can honestly and wholeheartedly say I believe in the songs I create and think that they should be in the world, have value, even if I’m the only one who recognizes this value is me.

The above piece of writing is a way for me to impart with the heaviness and sadness I have kept in my heart for so very long. The anger and relentless bitterness that felt as if it might strangle me to death is nearly gone and I can see it’s behind disappearing into the sunset, this is me sharing my experience and music and hoping that we can move forward in 2020 and do things for the right reasons, and see the little people who are working tirelessly for the love of creation and art, for nothing more than to share a blinding moment of connection.

Through this I pat myself on the back because I let love consume all the darkness, I let love smother the sorrow and I let love guide me to create two albums in a small space of time that I am truly proud of. I also found the courage to publish my first book of poetry and if I didn’t start doing things for me again, I really can’t say whether I would be doing what I’m doing right now, who knows maybe I wouldn’t even be writing music or poetry at all.

So as I finish expressing myself in this strangely cheesy half-hearted mantra, I thank those who have stuck by me even when I couldn’t even stick by myself.

Hope you enjoy the music and words.

New Track out and new album on the way

I've been busy working on a follow up to my 2018 release Anatronic.

Check out the new track below: 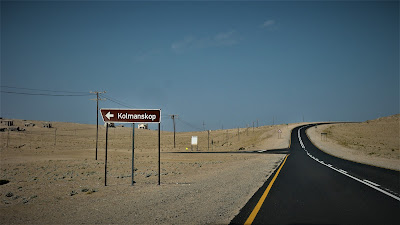 The new album is officially out on Bandcamp, it launches tonight at Khaya Records, only 20 hard copies available, get it for free or a donation below: 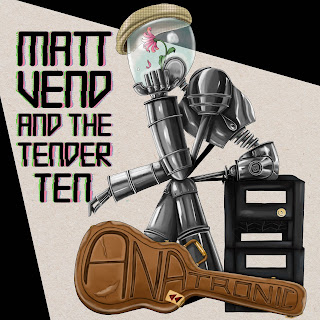 NEW ALBUM, KHAYA RECORDS ON THE 13TH AND TOUR!

Tour is coming up and I'm playing a show at Khaya Records at the bottom of Florida Road, Durban on the 13th of December, we are raising much-needed petrol funds for our tour so please come and show some love any donation big or small is greatly appreciated. The digital version of the recording will be out on Monday. For now, you can check out this track I put out, which is on the new album. The track was mastered by the epic Neil Snyman (produced albums for Ladysmith Black Mambazo, Springbok Nude Girls). The final full album was mastered by Alejandro Rojas all the way in Mexico City.

Listen to a new track off the album here.

See you on the road. 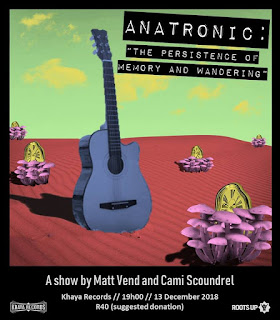 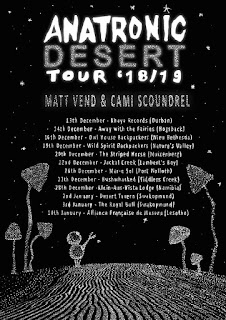 Live footage from a house show a few years back featuring John Will Sail from Australia. Enjoy.
Posted by Matt Vend at 17:56 No comments: